I wrote about planning for our trip to Amsterdam here and here. See the first part of the trip in Berlin here and Cologne here.

We had tickets for Anne Frank House so we all met in the lobby of the hostel at 9 AM to head out. When we got close there was a big group of people standing at the entrance of the roped line (I thought they were tourists looking down the canal) so we walked by the group and snuck under the rope. Well, apparently that was the start of the line and they were checking tickets, oops! The tickets we booked were for the 30 minute introductory lesson and then the museum entrance so we had to wait in a different line. I would definitely recommend doing the additional 30 minute introductory lesson – the line is much shorter and it’s the same price as the museum admission.

To book tickets, they come out online 2 months in advance for just the museum and 2 weeks in advance for the 30 minute lesson + museum for €20 (includes an audio guide). Chances of being able to book a ticket at the museum day of are very slim and I recommend booking early to get the time slot you want! We booked the earliest slot available and it was still pretty busy in the museum.

After the museum we stopped at Il Panorama for a bite to eat and to plan out our day. I didn’t have too many things on my list of things to do and everything was within a 30 minute walk so we set off to explore. It was so chilly we often just popped into stores to steal some warmth! A few of the things we stopped to check out: the Homomonument, Oersoep, Amsterdam Canals (you can’t miss them), the Heineken Brewery (we didn’t have tickets so we didn’t do the brewery tour), Rijksmuseum and the iAmsterdam sign. 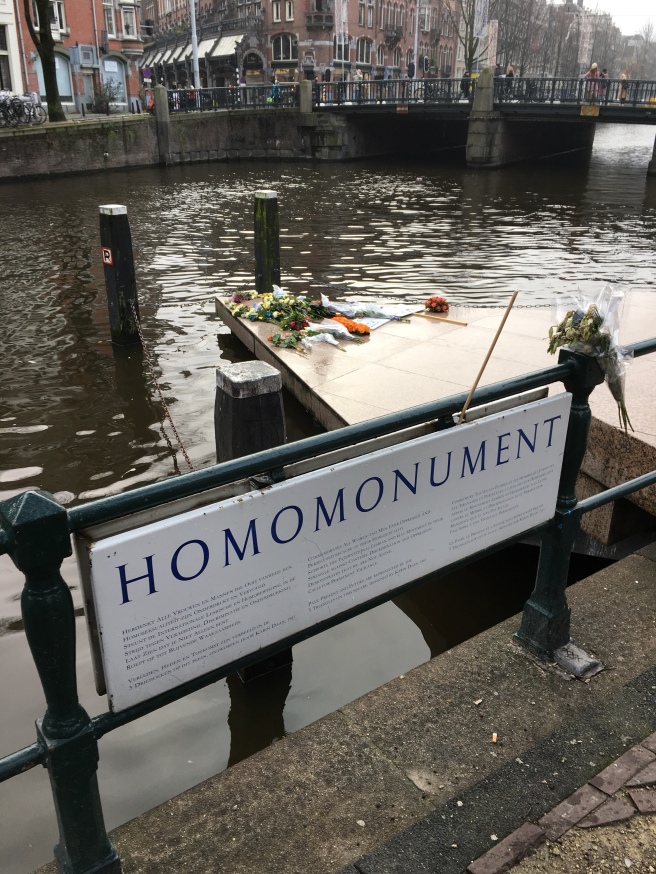 We stopped for food at De Spiegel- which had amazing food and great service and we could charge our phones. I got the Van Gogh sandwich. After dinner we did some window shopping on Nieuwe Spiegelstraat, which is an antique shopping street in the heart of the Amsterdam art district. I fell in love with an art piece at Villa del Arte (but definitely could not afford it). His name is Jean-François Rauzier and you should Google him. 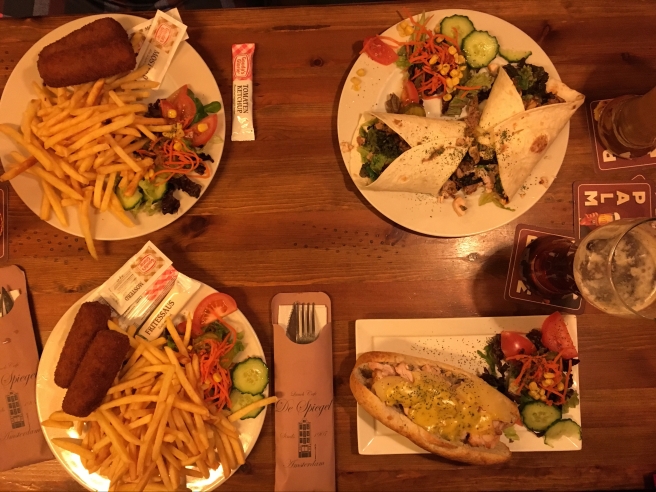 The Red Light District was packed with people, even though it was freezing out. We were out until the early hours of the morning before making our way back to the hostel to sleep.

We (I) woke up very hungover. We had a coupon for the Happy Pig for some pancakes but there wasn’t a lot of seating room so we went across the street to Le Pain Quotidien for breakfast instead. I realized after we sat down I had been to one in London and the food was tasty and healthy so I knew it was a good choice. I ordered eggs and salmon (and a pot of tea of course).

We decided to head to the Museum of Prostitution next. Honestly, it was way more informative than I expected and I recommend doing this one sober! You pay €9 and receive an audio guide that tells you stories of past prostitutes, the history of prostitution, the legalization in Holland and more. You get to walk through rooms and see the conditions of the prostitute’s workplace, stand in the windows while passersby look up at you, and read other peoples confessions at the end. It is way worth the €9!

After the museum, we wandered around Amsterdam stopping at souvenir shops, Ripley’s Believe It or Not!, used our coupons from the hostel for Flemish fries at Vlaamse Fries and a free drink at the casino. I clearly do not know casino etiquette and was pushing buttons on machines when I just about got smacked by someone who had 3-4 machines going with his bets. We left immediately after. We got to have a drink at In’t Aejep, one of the oldest bars in Amsterdam, and the bar was very eccentric and welcoming. We also stopped at the Cheese Museum and grabbed some cheese from Henri Willig to take home (the smoked cheese and truffle Gouda were a hit at Christmas). Our final stop in Amsterdam the Red Light District where we had a few drinks at Excalibur, checked out the shops and finally a night cap at the Bulldog Hotel.

Our last day of the entire trip was spent travelling home. We took an airport transfer from Amsterdam Centraal to the airport to fly home with WOWair. I ended up getting so sick on the plane (I’m sure the previous night’s drinking was a factor) so it was not an enjoyable journey. Luckily, the guy sitting beside me moved after take-off and I had a whole row to myself! So I was able to curl up and sleep.

Realizing later: grass = marijuana! We’re in the process of legalizing it in Canada but they tolerate it in Amsterdam. *Face palm*. Still laughing at myself.

Well, that’s a wrap! I can’t wait for my next trip to Europe, I’m thinking Edinburgh next! Do you have any funny stories about getting through customs? Share them in the comments!

Passpportunities is a participant in the Amazon Services LLC Associates Program, an affiliate advertising program designed to provide a means for sites to earn advertising fees by advertising and linking to amazon.com