I did all my planning posts by separating them by city so I’m going to do the same for the actual travel posts. If you’re interested, my planning posts for Berlin are here, and here. I also wrote a post on the German Christmas Markets here so I haven’t given too many details in this post about them.

I recently got in an accident while cycling and sprained my back so I’m sending a huge shout out to two of my friends who carried my backpack the entire trip. Thank you!!!

We used the public transit system a lot in Berlin. For only €7.70 for a day pass, it was definitely worth it and we got to see so much while in the city. There were five of us meeting in Berlin: three Canadians on the same flight, one Canadian coming from  Prague and one German coming from Cologne. We all met at the hostel around noon (yay for high school reunions and long distance friends!!) so we stored our bags in the luggage room and went off in search of food.

We stopped at Augustiner near the Gendarmenmarkt and I tried schnitzel and potatoes (which was just as amazing as I thought it would be). Next, we stopped at the Gendarmenmarkt Christmas Market to see what all the hype was about. This particular Christmas Market is free between 11-2 but €1.00 otherwise. We got there at 2:10 pm so we paid the fee and wandered around, grabbed a tea/coffee and enjoyed the Christmas ambiance. 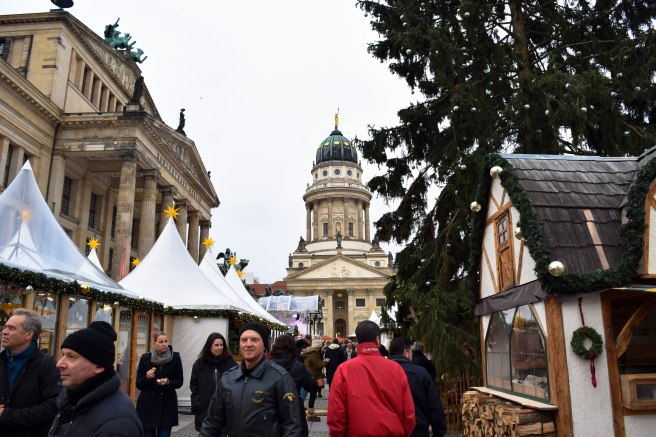 After the market we went off to the hostel to check in to our rooms and freshen up after a long day of travelling already. Next stop: Brandenburg Gate!

Isn’t it magnificent? It is an historic gate that was used to mark the start of the road from Berlin to the town of Brandenburg an der Havel.

We wandered off to Potsdamer Platz to check out their Christmas Market. We tried our first cup of glühwein (mulled wine) and I was hooked! You can check out my post here about the Christmas Markets. For a deposit of €2.50, you get to keep the mug! We wandered around the market with our glasses of glühwein, trying to stay warm but enjoying everything nonetheless. 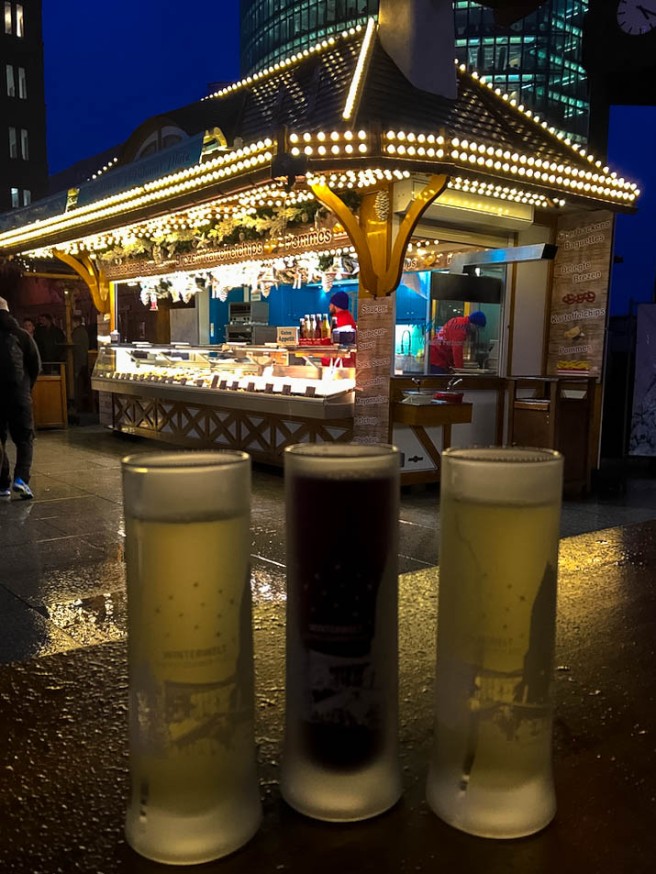 After polishing off our drinks, we went off to the Mall of Berlin which was appropriately decorated for the holiday season. 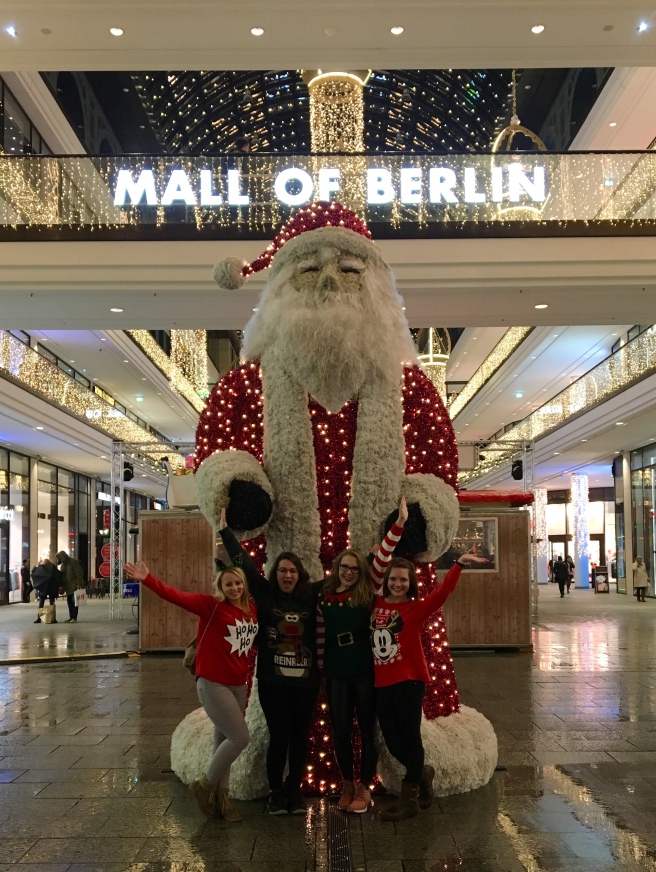 A quick stop at Checkpoint Charlie and the black box museum, filled with history of the Berlin Wall. You can see sections of the wall all around Berlin as a reminder of the past. 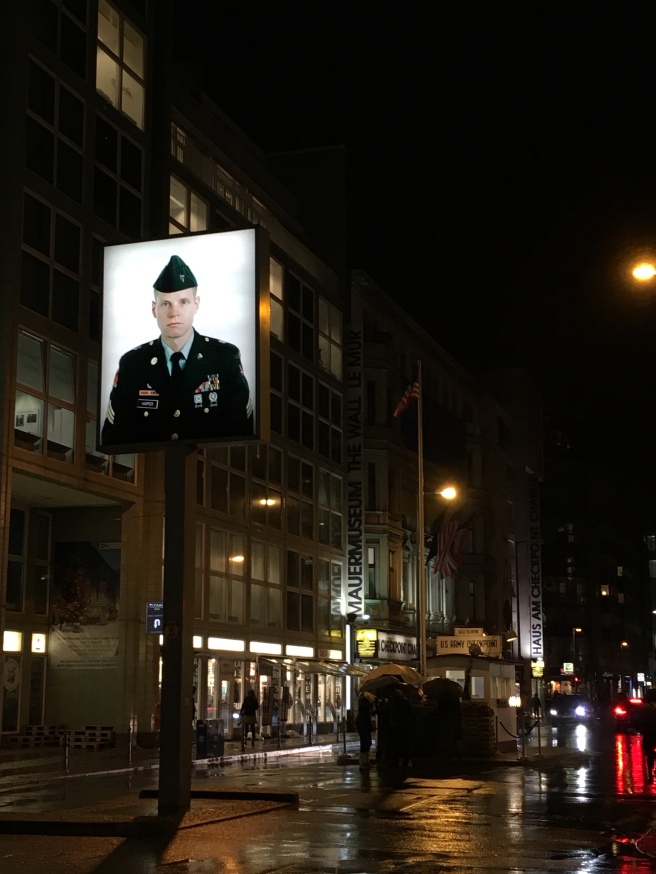 Finally, we stopped at Vapiano, an italian restaurant with an entirely new way of ordering for me. You pick a table and then stand in line to order food while the chefs prepare it in front of you. The food was amazing and the experience was worth it. Finally, we finished off the night with a few drinks at Que Pasa. At this point, I realized I didn’t have enough cash – most places didn’t accept cards! To save on the ATM fee, we took out cash for four of us to split.

We started off the day eating as much as possible at the hostel (€5.50) to hopefully save money on food throughout the day (not the case for me). Our first stop was back to Checkpoint Charlie to check out the Black Box Museum in daylight. We decided to forgo the museum (€5) and read the information on the walls instead. We stumbled across a few interesting stops along the way.

We stopped back at the Holocaust Memorial to see it in daylight (and while it wasn’t pouring rain). As upsetting as it is to think about the past, I believe you can’t turn away from the past just because it’s painful to think about. We have to learn from the past and try not to make those same mistakes.

I prebooked a free tour at the German Reichstag Building for noon so we arrived about 30 minutes prior to the tour to get through security. It was very similar to going through airport security: no liquids, bags are checked and you walk through metal detectors. Just be forewarned if you plan on going! The tour lasted approximately 90 minutes and I would definitely recommend it to someone visiting Berlin. Following the tour, we had the opportunity to check out the dome. It was pretty impressive, don’t you think?

By this point we were hungry so we hopped on the bus to head to the Kaiser Wilhelm Memorial Church Christmas Market (in Breitscheidtplatz). I grabbed a gluhwein and tried currywurst for the first time – I had no expectations for how it would taste but I loved it. I’m definitely going to have to try to make this at home. We also went into both the old and new churches. The old church had a few boards to teach visitors about the history and burning of the old church. The new church was adjacent to the old church and has a beautiful interior.

We caught a bus from the Christmas Market to the Victory Column, the Siegessäule, and made it just in time! Opening hours are until 5:00 pm and we got there with time to walk to the top of the tower, take a look around the museum and get out before it closed. Admission was €3.00 and the views are totally worth it (but we could have done without the wind). The museum has replicas of historic monuments and buildings from around the world. I loved seeing places I’ve visited and getting ideas for my next travel adventures!

After visiting the Victory Column, we hopped back on the bus to head back to the hostel for a nap and to get ready for dinner. We also managed to pass by the Bellevue Palace and snapped a picture.

Que Pasa was our destination for dinner: I got the tomato soup. I wasn’t very hungry after all the food we had been enjoying at the markets but definitely wanted something. We stayed for a few drinks and then wandered off to Alexanderplatz to explore. Unfortunately the Christmas Market was closed by the time we got there so we checked out the Berlin TV Tower and also this pretty cool world clock! Next, it was back to the hostel for bed. 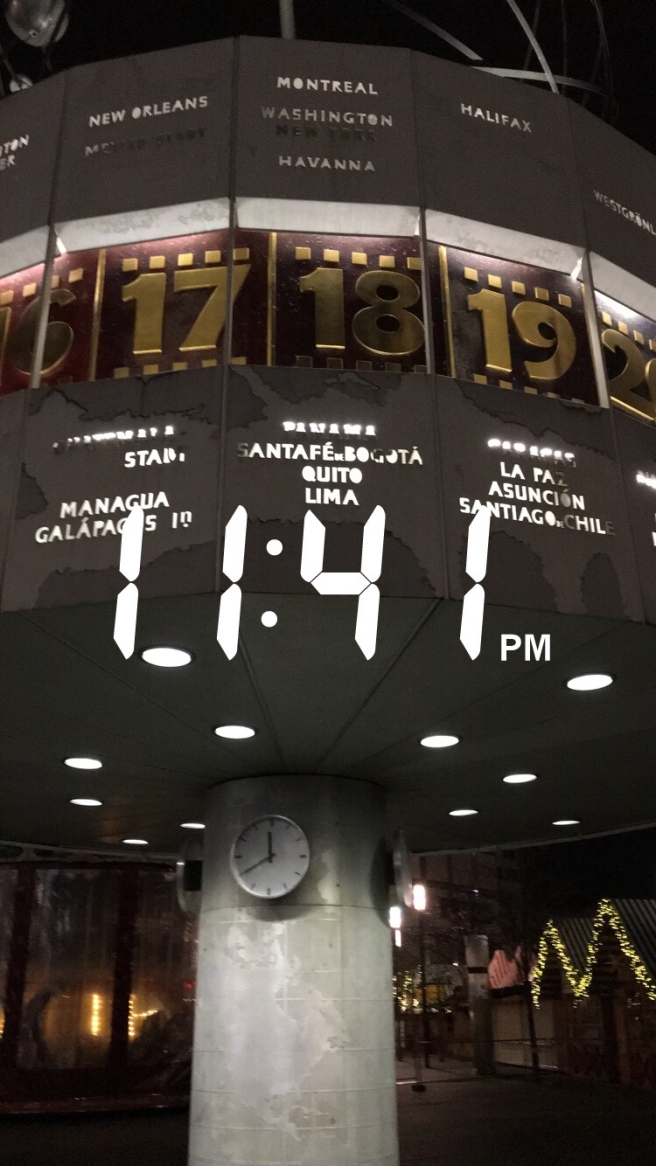 We slept in a bit for our third day in Berlin, and all met for breakfast in the hostel for 9 AM. Since we were checking out of the hostel but not leaving Berlin till the evening, we packed our bags and stored them in the luggage room for the day. (This is where bringing your own lock is handy if you’re worried about leaving your bag). Our first stop was Museum Island to visit the Berlin Cathedral and take a look at the other wonderful museums. Since we didn’t have much time left in the city, we decided to just wander around Museum Island rather than going into the museums. Next time!

We were on our way from Museum Island to the East Side Gallery and walking across the bridge we were serenaded by a great accordion player. It’s the little things!

The East Side Gallery was as spectacular as we thought it would be. There are artists from around the world (including Canada!) and very little graffiti. Check out some picture below! 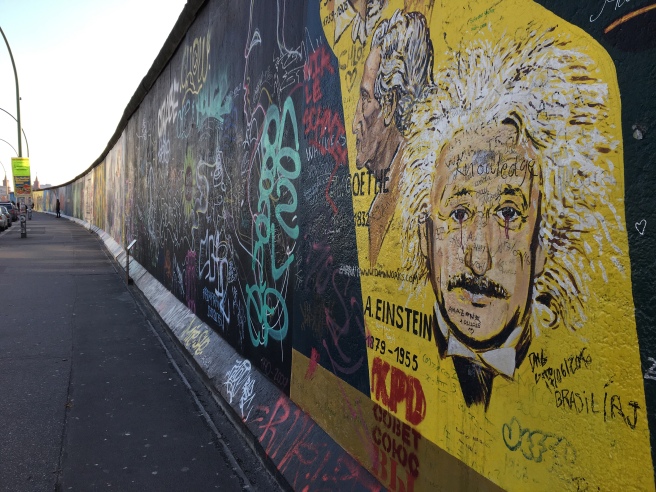 Our next stop was the Templehof Berlin which is an old airport that was also used to drop food and supplies to West Berlin when the Berlin Wall was still erect. In 2015, the based was to be used as an emergency refugee camp and a public park. It was a relaxing final afternoon/evening in Berlin. 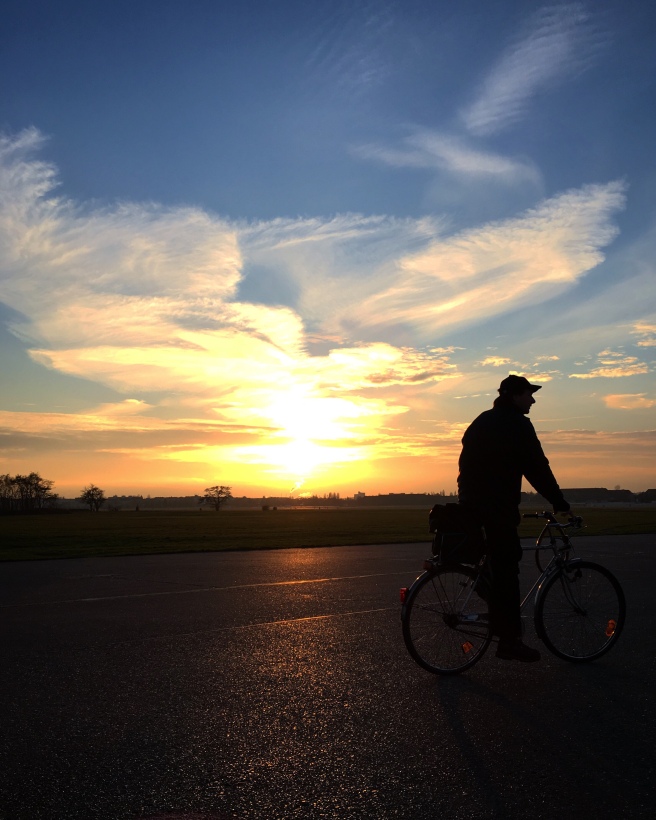 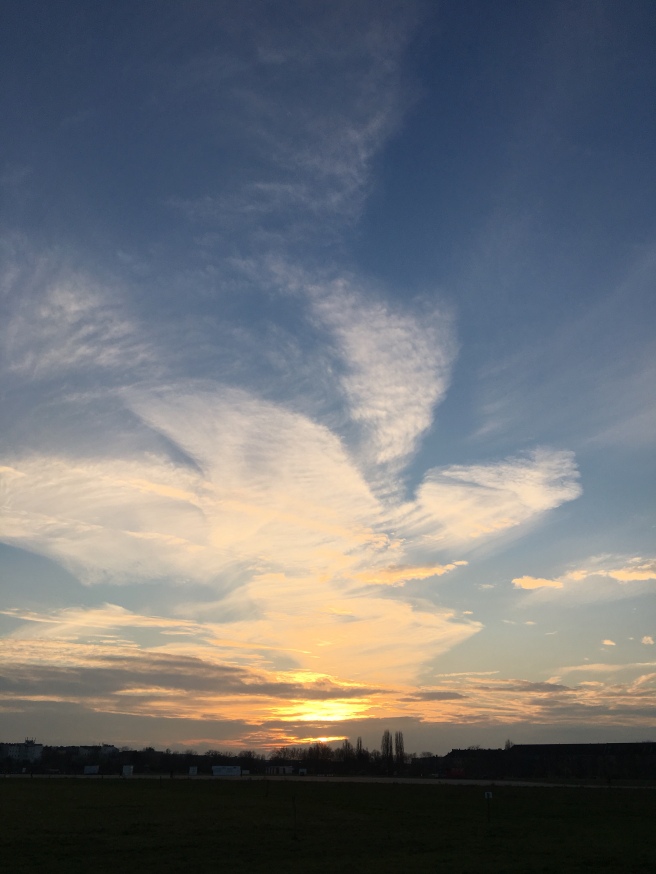 We then grabbed food at Mustafas Veggie Kebabs – the wait in line was totally worth it! I’m drooling now thinking about how delicious it was. It’s an outdoor booth so we decided to order our kebabs to go and brought them back to the hostel to enjoy them. There was so much stuffed into the kebabs and totally worth the €3.50. Definitely make a stop if you get a chance! 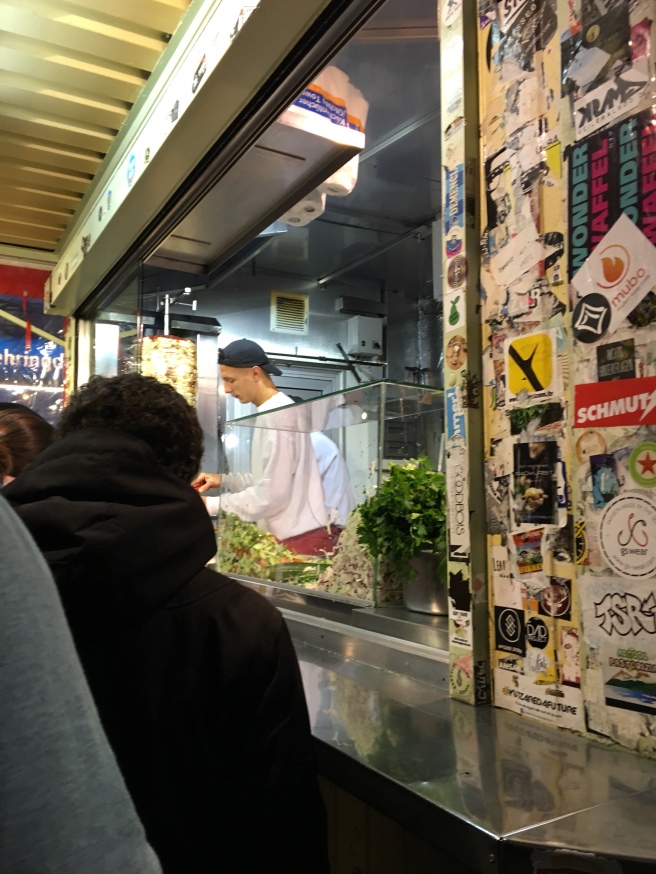 After enjoying (and inhaling) our kebabs, we grabbed our bags and went off to the main station. We were waiting at gate 7 and there was an announcement about 5 minutes before our train was about to arrive that it would be arriving at gate 5. So we dashed off to gate 5 (which was luckily very close) and hopped on the train to head to Cologne. It was about a 4.5 hour train ride so we tucked in, ate some food, took a nap and were off to our next destination.

What do you think about our itinerary? Do you have any suggestions for other readers?

One thought on “Berlin, Germany”