I just returned home from my first solo trip late Sunday night. It’ll take me a bit of time to sort through pictures but I wanted to give you all a quick recap of my trip. It’s definitely one to remember!

I did a few planning posts earlier this year if you want to check them out, but I’ll refer to them again in my upcoming posts.

I stayed in hostels in each place I visited:

Alright, with all the boring (but useful) stuff out of the way, here’s the fun stuff!

Everyone says it’s expensive, but only if you pay for all the top tourist attractions. The hostel I stayed at was cheap and all the museums are free/by donation (with a fee for the special exhibitions only). There is so much history in the city you can NOT get bored. If you do want to do any of the attractions, I suggest the London Pass and to go early in the morning to avoid long lines. When I passed by in the afternoons, the lines were so long for places like Westminster Abbey and the London Eye. I personally walked everywhere but the Underground and bus system seems like a fantastic way to get around the City. My favourite places I went to were the British Library (Sir John Ritblat Exhibit), Platform 9 3/4 at King’s Cross station and the Wallace Collection.

Other notable mentions are the Crypt Museum at All Hallows by the Tower Church, Southwark Cathedral and St Dunstan in the East ruins. I recommend looking up opening hours for many of the museums/galleries as some are closed Sundays/Mondays or closed early during the winter seasons. 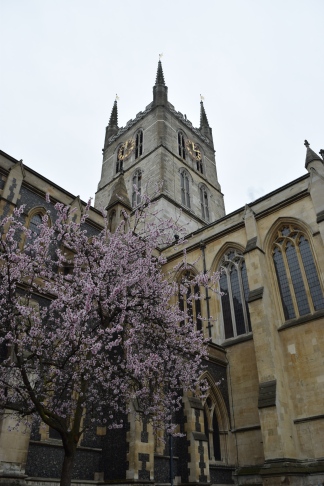 St Dunstan in the East Ruins

I stopped at the Dark Hedges, Carrick-a-Rede Bridge, Giant’s Causeway, Dunluce Castle and Belfast. I 100% recommend paying for Giant’s Causeway for the audio guide and the Paddy Campbell’s Black Taxi Tour in Belfast. They were both worth it and were an amazing way to see two different sides to Northern Ireland. Sadly, I missed the Titanic Museum in Belfast and didn’t get to do a free tour of City Hall.

As is to be expected, Dublin around St. Patrick’s Day was busy but worth it. There’s actually a festival surrounding the holiday that a lot of people I talked to didn’t realize was happening. There are events around the city between March 16 to 19 and well worth looking into. I got to catch the Festival Ceili (March 16), Parade (March 17), a walking tour (March 17) and enjoying live music on Temple Bar (which is the name of a street as well as the name of a bar). I found many of the attractions in Dublin were available at a cost so by the end of the trip I had some leftover cash and made it into St. Patrick’s Cathedral and the Little Museum of Dublin. The National Gallery was free, which I also recommend checking out! My personal favourites were Marsh’s Library and Dublin Castle.

I also visited the Guinness Storehouse (it really does taste better in Ireland) and enjoyed the Green Door Market with local vendors. A must-see if you’re there on a Saturday!

And that’s a (quick, very condensed) wrap! Stay tuned for more details on each part of my trip. I have a lot to write about and can’t wait to share it all!

One thought on “Europe Trip Preview”